Below you can find the various translations of Franka books I have. In this case I go for complete series in all the available languages. There are not many translations of this famous Dutch comic, so it's not too hard a job to try and get everything ever published. If you are interested, or if you can help me with new items, please mail to Martin Hooymans. I have pages like this for Asterix and Tintin.

I use the original story numbers (see below). A plus (+) means that I have the book. A minus sign (-) indicates that I know that the edition exists, but ... I am still looking for it.

Am I missing some edition? Please let me know

Danish
Unfortunately I only have a few of the Danish editions. According to the website of Carlsen they keep track with the Dutch series. Recently, I ordered a couple through the internet, but I have the idea that the low numbers are out of print. Dwight R. Decker from Arizona sent me number 1 and 4 for which I am very gratefull! Who helps me with the rest?

French
The first three French albums were published by Dupuis. They all have a different cover from the Dutch version.
The double album Les Dents du Dragon was published by Les Humanoides Associés. The covers of the two albums together form a very beautifull picture. 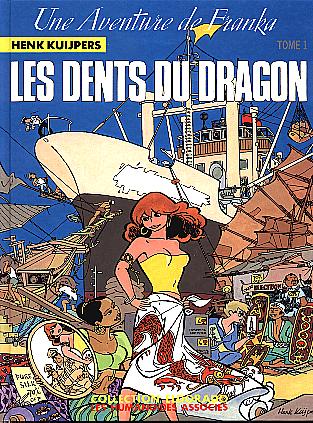 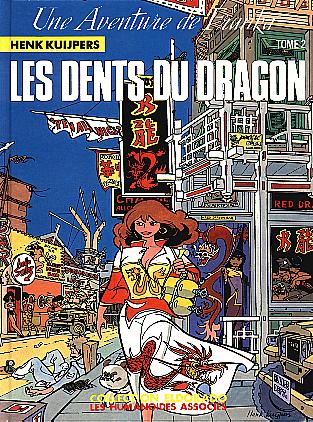 Finnish or Norwegian? Norwegian!
According to Dick Heins and Georg Lint (1989) the albums are only in 6 different languages of which the Norwegian edition was not sure; the authors of "Het Geheim van de Archiefkast" (The Secret of the Filing Cabinet) mention 3 Finnish editions with titles that do not look very Finnish to me but rather Norwegian: 6 Monstret I Dimiman, 7 Draktanden, 8 Lovsfarlig Cirkus. Both Anders Karlsson and Markku Jaaskelainen assured me that there is no Finnish edition. If you know of any Finnish (which is unlikely) or Norwegian edition (which is likely) or any other not mentioned in this list, please let me know!

(01-05-1999) Øystein Gabrielsen wrote me: I am a Norwegian fan of Franka, and I have all the norwegian editions (I think). This is all the 6 first albums. The first is published as album #1 in the Franka series, and the next five is published in a hardcover book series from "Tegneserie-bokklubben" (= the comic book club). The four first of these books are numbered, and contains two comic stories, i.e. one Franka and one other story. I am now at my job computer, and do not have the books beside me, but if further informations is wanted, (norwegian title, when published, publisher, number of the "Tegneserie-bokklubben" books, etc.) do not hesitate to contact me for these details.

(13-11-2000) Dick Heins (himself!) wrote me an e-mail message: "There never were any Finnish editions. It was a printer’s error in the "Archiefkast". My apologies for that."

(08-03-2002) Ole Endre Bergerud from Norway seemed to have copies of two books for sale. Due to destroyed e-mail messages our exchange did not succeed, which is very pityfull. He mentioned "UHYRET FRA SUMPENE" (Monster van het Moeras) and "CIRCUS SANTEKRAAM".

(16-10-2003) Trond Michelsen wrote me: "Now, I don't know much about the Franka cartoons at all, but I used to subscribe to the Norwegian tegnseriebokklubben (cartoon book of the month), and I noticed that among the books I have, there are three Franka cartoons. Every book in tegnseriebokklubben is a hardcover book with two regular cartoon albums." And then he helps us out with the information on the books he has: Tegneseriebokklubben #45 is Franka 2 and is titled Mesterverket in Norwegian (Het meesterwerk), #61 is Franka 3 Spøkelsesskipet (De terugkeer van de Noorderzon) and #68 contains Franka 4 Lastebåtens hevn (De wraak van het vrachtschip). (to be continued)

(20-08-2004) José Aragón wrote me that he suspects there is a Spanish version of "Moordende Concurrentie" too, since he has a copy in Catalan (see below).

Catalan
José Aragón notified me that he had three Catalan editions. He described them as:
1.- "Les dents del drac", that you would know as "De tanden van de draak". According to your page, this was the same first number for the Spanish edition.
2.- "La caiguda del drac", which is "De ondergang van de donderdraak". According to your page, this was the second numkber of the Spanish edition, with the following title: "La caída del dragón"
3.- "Competència criminal". "Moordende concurrentie".

And since I do not posses one of them, you are all kindly invited to help me to get one!

Again, you are all kindly invited to get me a copy!

German
First, I was not sure if all the books were translated into German. The aforementioned authors report of an early series that covers story 2 till 8. That was with the editor Carlsen. Uwe Trenkner tells us on his page that Carlsen stopped in 1991 and that Epsilon picked it up with album number 10. I wondered what happened with 1, 9 and 11-15.

(06-10-1998) Uli Wieneke from Bavaria (Germany) helps us out: Carlsen started the series with no. 2 (Das Meisterwerk / Het meesterwerk). No 1 (Het Misdaadmuseum) was not published until now. So "Het meesterwerk" is the german no 1. Carlsen published the series up to no 9 (Moordende concurrentie, in Germany Nr.8) and then stopped. In 1996 (or 1997) Epsilon published Gangsterfilm (same title in German) as no 10 (same number as the original!). So, there is no german no 9. Since number 10 Epsilon keeps track with the Dutch edition.

(20-10-2000) Due to the success of the series in Germany Epsilon has decided to publish all the old books as well, in the correct numbering. So in October we can expect no1 "Das Kriminalmuseum", which was never published in German before. And from the start of 2001 all the books that were released by Carlsen, but instead of 1-8 they will be numbered 2-9 as in the Dutch editions.

Swedish
(09-09-1999) The Swedish series stops quite suddenly after number 7, right in the middle of the story that was spread out over two books. The first part of the story was published as "Draktanden" (number 7 in the Franka-series and also numbered 23 in the "Orn-serien"). But then the publisher stopped due to lack of interest in Sweden. In other words, there are not enough fans to keep the business running. Earlier, Carlsen as the first editor of the books number 1-5 gave up. Semic Press took the series over, started with "Monstret i dimman" (number 8 in the "Orn-serien"), then published the abovementioned "Draktanden" and then stopped. Nobody has ever picked the series up after that. For our Swedish fans this really is a pity ...

Thanks
I want to thank:
Dwight R. Decker from Arizona for number 1 and 4 of the Danish edition (please contact me since I lost your e-mail address!)
Anders Karlsson for the complete Swedish series and the unexpected Spanish edition and
Jan Ferwerda for the 3 French Dupuis-albums, that came with the unbelievable collection that I now have and that I named after him: The Jan Ferwerda Collection.

Back to Our homepage
Please do visit "The Enigma of Franka"

If you want to mail me, click on Martin Hooymans